Set sail on a swashbuckling voyage to a long-forgotten time and place when pirates ruled the seas.  This dark, boat ride has small drops but is a ride that is fun for all ages.

You’ll find Pirates of the Caribbean on both coasts, and can read more about the attraction on the respective park’s sites.  In Disneyland, Pirates is in New Orleans Square, and at Walt Disney World in Adventureland.

Pirates of the Caribbean in your Homeschool

Pirates are such a popular topic of interest for kids, this is really a fantastic opening to an interest-based study.  Even before you get to studying pirates, your family might enjoy some history of the attraction itself.

Did you know that it was originally designed to be a walk-through attraction?  But after the success of It’s a Small World, it was changed to a boat ride.  Pirates of the Caribbean was the last attraction that Walt personally oversaw, and sadly, he died before it opened in 1966.

Besides utilizing cutting edge technology in its audio-animatronics, Pirates also features convincing special effects like near misses with cannonballs and making a burning town look real enough to spook at local fire chief while riding.  (Interestingly, the attraction features a shut-off of the effect should a real fire erupt).

You can read more about the history of the attraction here and here.

Some pirate-themed books you may want to check out:

It might be fun to watch the Pirates of the Caribbean movie as well (note that it is rated PG-13 for some scary skeleton violence that might be too intense for younger kids).

You could get the whole series, 5 movies in all, if you want a whole lot of pirate watching.

The web is full of unit studies on pirates, find several linked below.  You might also consider adding some practice with map skills, using a compass, and some fun pirate crafts.

If you’re doing a more in depth geography study, this collection of over 300 customizable maps could be an asset. 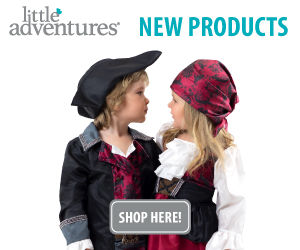 Pirates Unit Study – This study is for ages 8-13. You will gather information on the history of pirates, where they sailed, what their lifestyles were like, what jobs they did, how they dressed, how they divided their spoils, and more.

Project Based Study – This quick pirate unit study will give you just enough for a detailed deep dive without expecting weeks of your time.

Talk Like a Pirate Poetry and Copywork – This 10 page download costs just a few dollars.  You can also check out the free “Talk like a pirate” vocabulary cheat sheet.

Have a Pirate Party

Maps: A Unit Study – A study of Gerardus Mercator, the history of cartography, and more.

Would you help us keep our links up to date?  If you notice a broken link, please let us know!

Susan is a participant in the Amazon Services LLC Associates Program, an affiliate advertising program designed to provide a means for us to earn fees by linking to Amazon. com and affiliated sites.